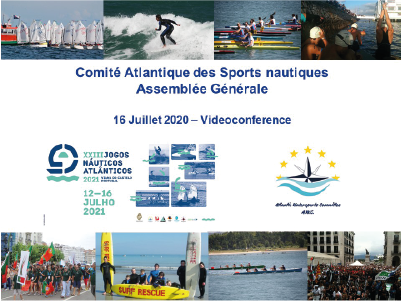 The General Assembly of the Atlantic Watersports Committee was held by videoconference on Thursday July 16 in the morning. Despite the report of the Atlantic Games in 2021, the Committee indeed decided to maintain this elective GA in 2020.

The new membership campaign has been successfull, the Committee has to date 22 members including 14 national or regional sports federations and clubs from the 7 watersports In addition to the activity report, the financial and wealth exchange report on the Committee's projects, the members proceeded to the selection of the Management Committee (15 members) and the Executive Committee (9 members).

The 9 members of the new Executive Committee are therefore:

The next working meeting of the Management Committee will take place on September 22 by videoconference. The President concluded the General Assembly by thanking all the actors and in particular the CROS Pays de la Loire which strongly supported to revive the dynamics of the Games with the successful edition of St Nazaire in 2018. He congratulated the new members and recalled the objective of making future Viana Games a European success and, for the Committee, reached 40 members in July 2021.